What a pissoir: The unique story of French urinals 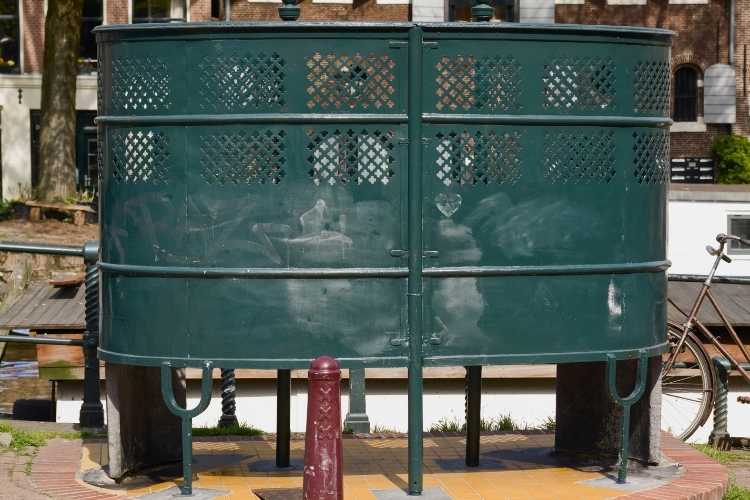 Is the pissoir among the greatest French inventions? It has some competition. After all the French have invented many things including taxis, the hot air balloon, internal combustion engine, inflatable tyres and the sewing machine.

Not to mention the bikini (arguable), cafetière, Braille, camera phone, hairdryer and even the parachute. But the urinoir (pissoir) has to be the most iconic and evocative French invention. Although, to be fair, the French simply embraced Roman enterprise.

The story of the pissoir

Throughout their long history, the French of all ranks and station, have urinated in the streets. A predisposition untrammelled by feelings of embarrassment not even when the target of their emissions was a palace wall or even the statue of a king.

Unlikely as it may seem, in 1809 Napoleon was heading for Spain with his wife Josephine, when she experienced ‘un besoin très pressant’, just as they were passing a vineyard called Congaillard.

Ever since, a Gironde wine bears the name La Pissotière de l’Impératrice (The urinal of the Empress) produced by Les Vignobles Soum in Marsas. I can’t say I’ve ever seen it on the wine list of any restaurants I’ve visited, but, if it was there, you’d order it, just for the Hell of it…surely?

Meanwhile, back in Paris, and tired of the sight–and by-product–of so much furtive, and potentially disrespectful, public urination, voluntary or otherwise, the government of the city decided in the early summer of 1830 to install public urinals (the great pissoir) on the principal boulevards of the city.

This was just in time, as it happens, for them to be converted to use as street barricades during the Revolution of that year. But the urinals survived to fight another day, and it was only a matter of time before the spin doctors of Louis Philippe, the ‘July monarch’, saw the pissoir as just so much free advertising space.

To be honest, that last bit isn’t completely true, I lied.

But the monarchy of Louis Philippe began with revolution, ended with revolution and feared revolution every day of its existence. So the role of the humble pissoir took on an exaggerated magnitude, and only later came to be used to advertise quick cures for rampant syphilis, and extol the virtues of Galeries Lafayette.

From the metaphorical ashes of the 1830 urinoirs, there rose the colonnes Rambuteau, cylindrical constructions first appearing in 1841 and named after Claude-Philibert Barthelot, comte de Rambuteau, the Prefect of the Seine department.

The dark side of the pissoir

Just two years later, there were almost 500 of them, and popular they were too. Especially with prostitutes, pick-pockets and those seeking same-sex liaisons.

They all soon learned that it was easier to allow their victims-cum-clients to be drawn to them as it were by the processes of nature, rather than wander the streets in search of them. As such the pissoir seems to have served as embryonic job centres, at least for a somewhat specialist range of employment opportunity.

In 1877, the simple cylindrical shape of the pissoir, was replaced by multi-compartmentalised structures, dotted along the boulevards, in parks and at busy locations, and known as vespasiennes after the Roman emperor Titus Flavius Vespasianus.

He was the clever fella who placed a tax on urine collected from public toilets for use in tanning, although nothing appears on record to indicate how he gathered the tax, or quantified it.

Visually something of an improvement, the new vespasiennes nevertheless continued to ‘…place the bodily function they serviced in plain conceptual view, the narrow bands of metal…barely obscuring the physical act itself.’

Nor was it long before a campaign was launched to provide urinals for women, although there is no extant indication of how these might function. In any case, as the 5th-century Greek historian Herodotus commented: ‘In Egypt, women urinated standing up’. Be that as it may, in Switzerland, by all accounts, they have temporary pissoirs for women, called, apparently, Peeasies.

How many pissoirs are there in Paris?

At their urological peak, there were as many as 1,230 pissoirs in Paris, but by 2006, only one remained, on Boulevard Arago, a monument to a Paris d’autrefois and a something of cause célèbre. You will still find a pissoir in the more remote towns and villages, vital destinations for those of advancing years who, needs must, never knowingly pass one.